These x-rays were taken in 2008 when I first considered getting surgery. I brought them to my current doctor who marked them up to show me exactly what he would be doing. The fact that the first metatarsal is at such a huge angle means that this is no ordinary bunionectomy. Instead, it would require breaking the bone at the joint shown, and then straightening the bone back in line with the rest of my foot. Then, the bones would be fused back together and held permanently with two screws. Of course, sawing off the large bunion formation would also be involved. I am hoping to get a copy of my new x-rays once I am healed so I can compare. But for now I've included a photo of an xray of a "normal" foot. See how screwed up mine was??

A week and a half until I get this cast off! 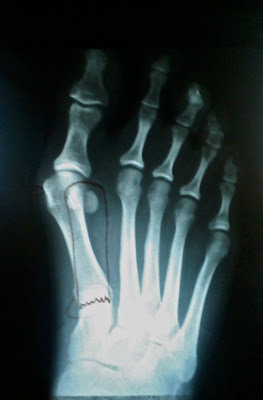 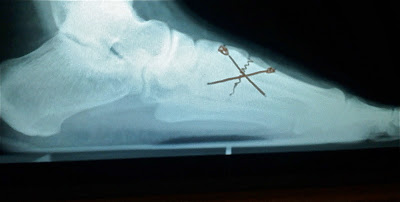