I'm rooting for her!

Hi ya'll! I have to say that although my August and September happiness updates went down the drain, my life is simply blissful. I have not made time to blog, obviously, but that's because I've been super busy doing other fun things like traveling, entertaining company, going to dinner parties, hanging out with my Leadership buds, and working harder than ever.

August and September - Pursue a Passion


All I think about when I think of October is NEW YORK CITY!!! For the past 18 years, I have been dreaming, planning, saving, yearning for NYC and I finally got there...with some of my favorite people of all time. October is one for the record books and I can't wait to tell you all about it!!! 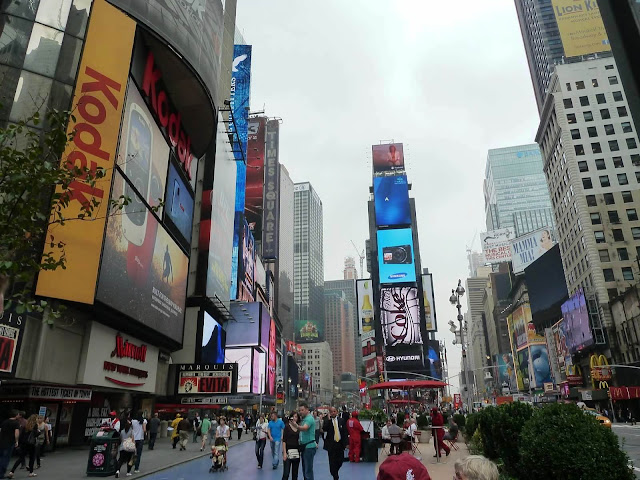 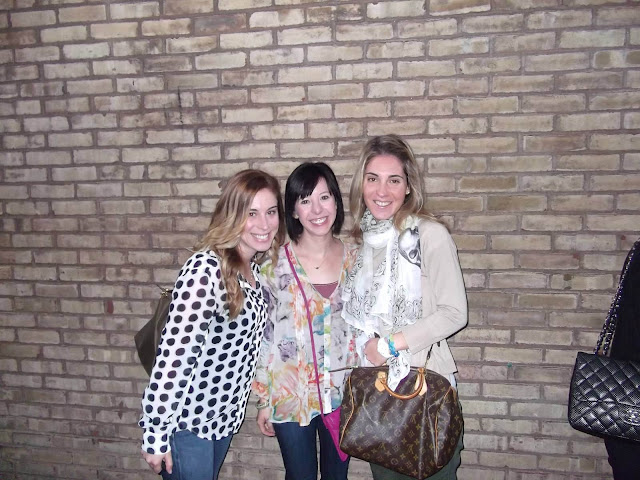 Did I tell you that we got a new queen bee? No? Well, we did! And it arrived in a Fed Ex box on our porch. Yep, not kidding! We got a queen bee delivered to our door. I seriously want to meet the person responsible for inventing mail-order bees. Just think of all of the packaging prototypes that didn't quite work out. Dead bee? No bee? Angry bee!

We had to get a new queen because without the queen, the colony cannot survive.

"The queen, for her part, is the unifying force of the community; if she is removed from the hive, the workers very quickly sense her absence. After a few hours, or even less, they show unmistakable signs of queenlessness."  - Man and Insects

So now all the queen has to do is lay eggs. And it's our job to make sure her promiscuity was successful. A thriving beehive needs lots of new larvae, eggs, baby bees, and the queen herself. We were on the hunt.

There are 9 frames in each box of our hive. Steve learned that the queen usually stays in the bottom box, so we decided to begin our search here. We suited up, and pulled out each frame one by one in search of the queen and her offspring. Steve used a bee smoker before we began which sedates the bees so that they aren't angry at you for entering their home! Once smoked, they barely buzzed around..calm and cool. 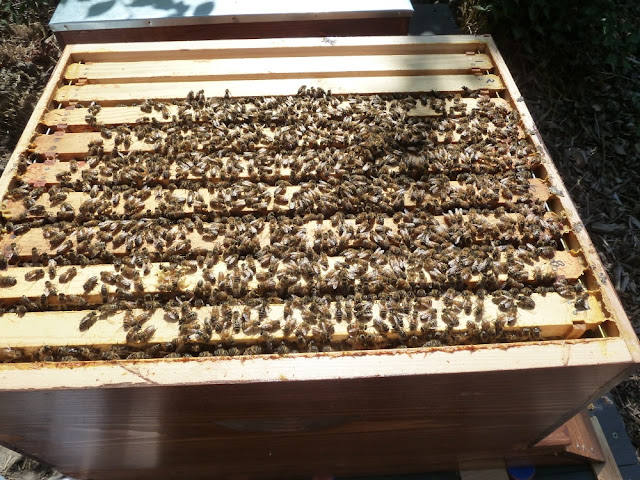 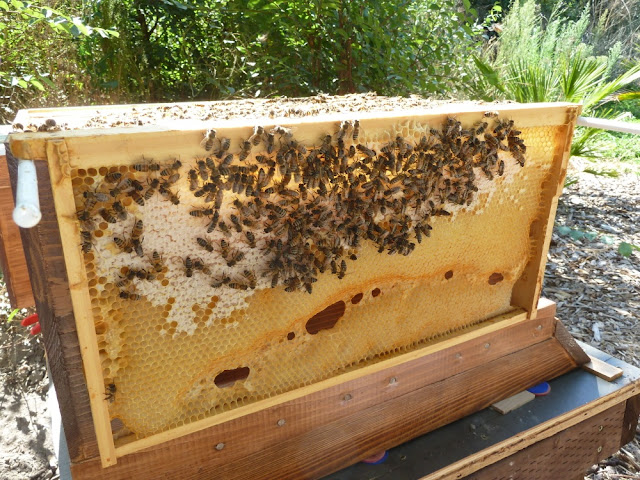 Along the way, we found all sorts of glorious things! My favorite being honey of course!!!! 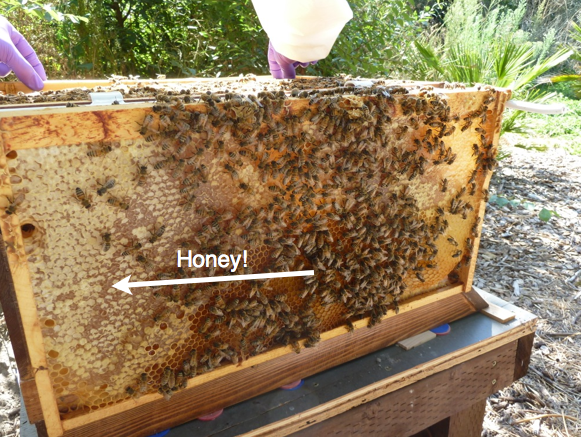 Each frame was more and more packed with busy worker bees. They were busy making honeycomb, storing the honey, capping the holes containing eggs so that the larvae could develop inside, and  depositing pollen in other holes.

"Honeybees are social insects and live in colonies. Each colony is a family unit, comprising of a single, egg-laying female or queen and her many sterile daughters called workers. The workers cooperate in the food-gathering, nest-building and rearing the offspring. Males are reared only at the times of year when their presence is required." - Bees of the World 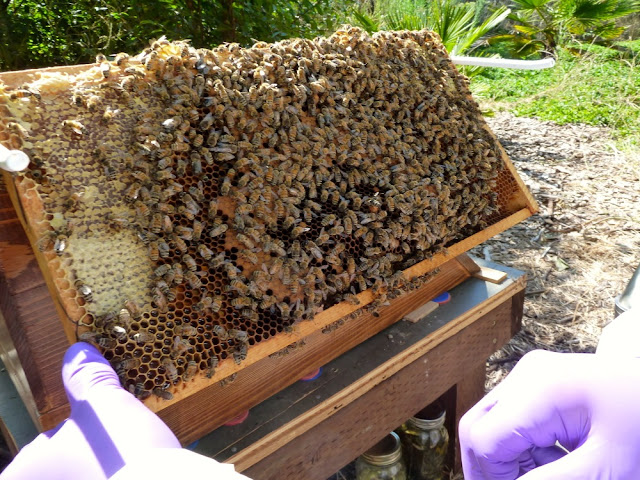 We knew the queen had a successful night out because we saw TONS of eggs and capped comb which meant there were larvae inside waiting to be born! In fact, as we were searching for her, we saw a baby bee pop out of a capped hole! Just like a baby chick coming out of an egg. She cracked open the cap and wriggled her way out, all hairy and small! 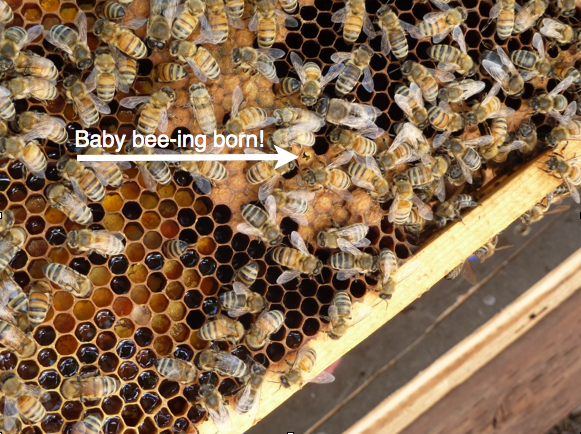 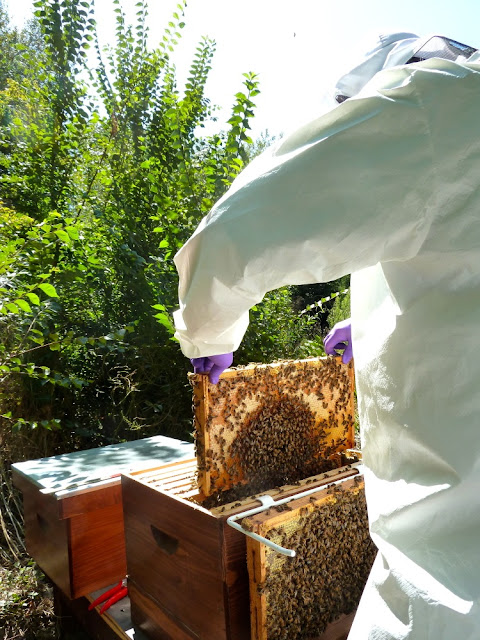 And on the 8th frame, we finally found her in all her glory! Do you see her? She is longer than regular bees with a narrow tail, smaller wings, with a hairless black crown. 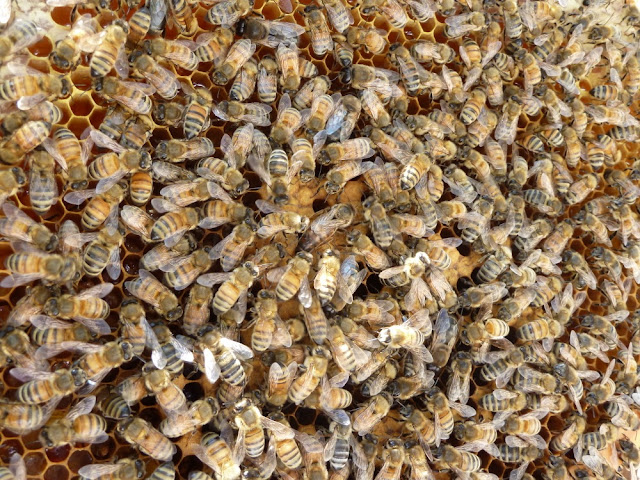 Research told us to look for a group of bees surrounding her like a flower. And once we saw that, we KNEW it was her.

"New beekeepers are told that the way to find the elusive queen is by first locating her circle of attendants." - The Queen Must Die: And Other Affairs of Bees and Men 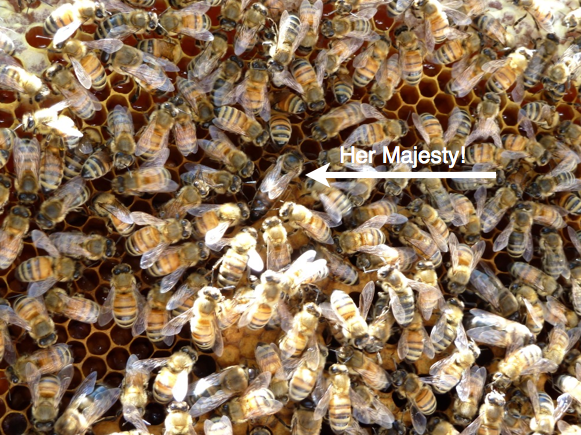 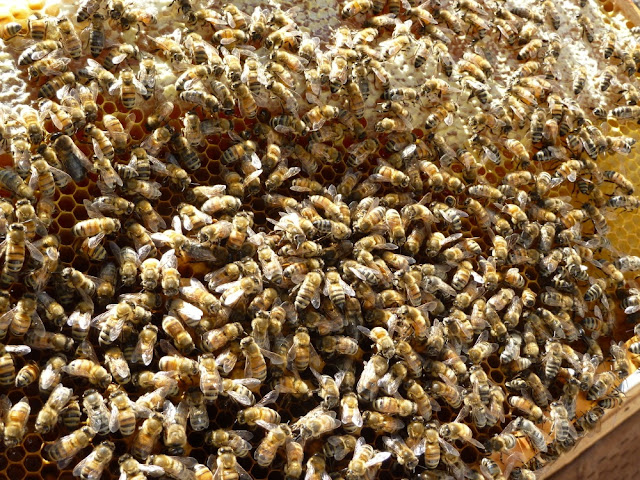 You can really see the bees encircling her. They clean her, feed her, and take away her excrements. What a life, eh!? 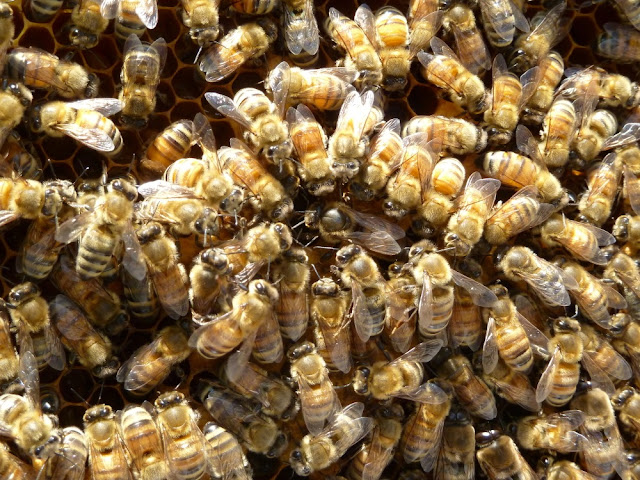 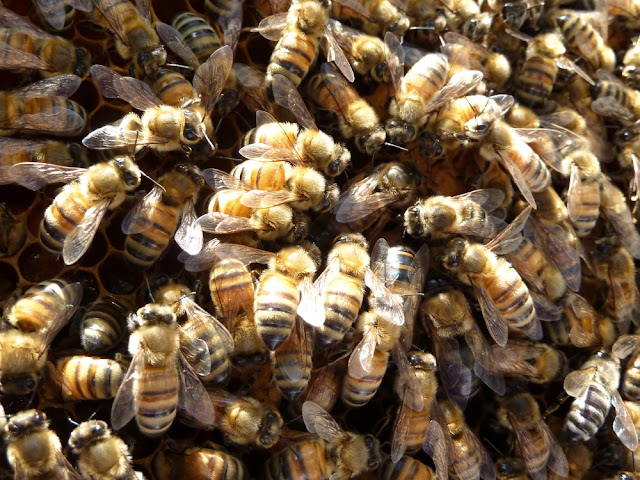