A few weeks ago, we helped our good friend Michael celebrate his 40th birthday at his mexican fiesta! It was such a rad party complete with a Mariachi band, two piñatas, a lucha libre server, and a bicycle-powered margarita machine!! To see some photos from the party (including me working for my margarita) check out Michael and Maren's blog! To thank him for being born (because we are all so lucky he was!), I made him a succulent terrarium straight from our garden. 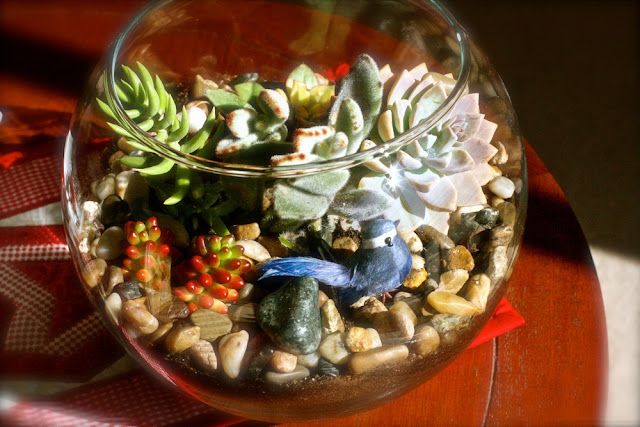 I also plucked some of my very favorites from our yard and put them into this lovely flower dish that I got for Christmas. It has spikes in the bottom, so you push the stems into the spikes, fill the bottom with water and without much effort the flowers, or in this case succulents, can simply soak up the sunlight and and brighten up the living room. 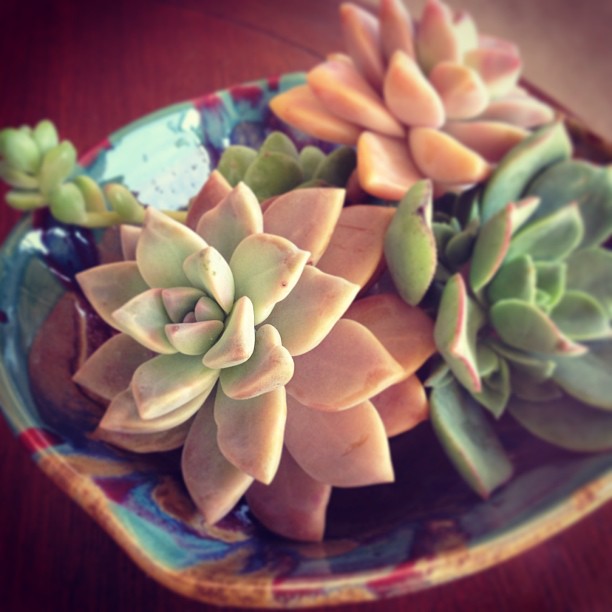 In the spirit of spring cleaning, I recently repotted a bunch of succulents in the backyard to give them more room to breathe. I rearranged all of the pots, cleaned them up a bit, and added some dimension with some pot stands, tree stumps, and painted crates (from our wedding!). Also, you can see the bottles on sticks with yellow flowers in the background - these are also from our wedding. They lined the aisles at the ceremony and I have finally dusted them off from the garage and put them to good use outside! They really give the backyard a cheerful feel. 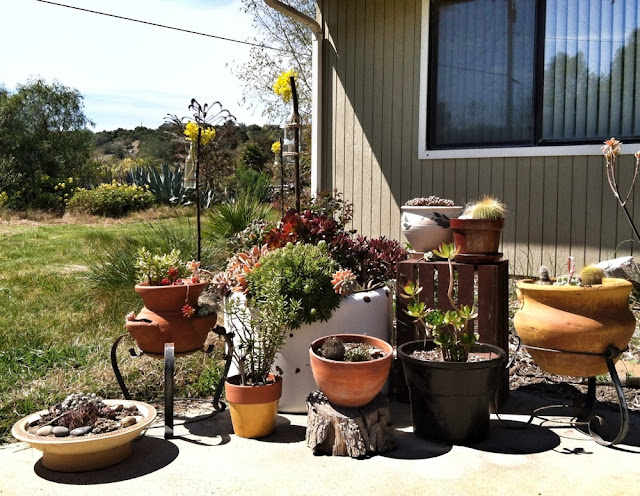 Last Fall, I harvested our green apples, peeled, sliced, and combined them with some brown sugar and cinnamon, bagged up a few batches and and put them in the freezer. A couple of months ago I tried making an apple pie using a Pilsbury crust and a crumble topping but the pie turned out like apple sauce with a mushy crust. Bleh! Steve told me that his mom makes the best pie crust, so she emailed it to me, and I tried the recipe last weekend. This pie turned out divine!!! It was the perfect consistency, gooey in the middle, flakey on the top and crispy at the edges. Add a little fancy vanilla ice cream to create a party! 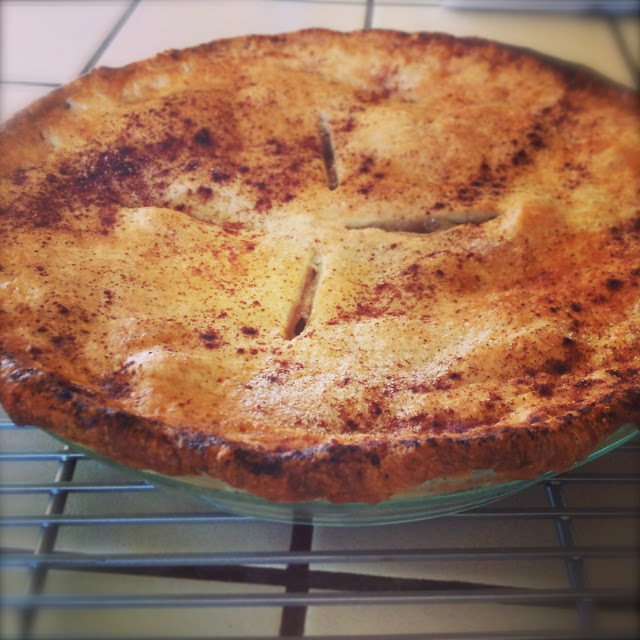 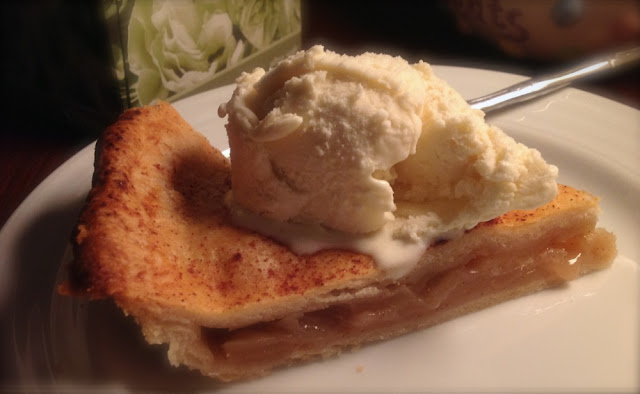 Here's Steve's mom's pie crust recipe:
Combine flour, salt, sugar, and baking powder. Cut shortening into mixture with pastry blender (I didn't have a pastry blender so I improvised and used a bowl scraper thingy) until pieces are about bean to pea size. Add water one tablespoon at a time and gently mix with a fork. When the dough is all moistened, gather it up with your hands into a ball. Divide in half.....roll to about 1/8" thick. If I have time, I sometimes divide the dough into two balls, wrap in saran wrap and put in fridge for a while. (Not necessary, though).

I use unbleached flour, Crisco yellow butter-flavored shortening, and ice water. The flour, be it unbleached or regular really isn't important, but I think the other two things are. The one time I didn't use the yellow Crisco, I was disappointed, so I always use it.


Side Note: I've never used shortening before and I bought mine before I read this carefully. I am not sure the difference between yellow and not yellow...is this the container color or the actual color of the shortening? Anyway, I bought a blue container of Crisco and the shortening was white, so I guess I used the wrong one, but it was still yummy!

Okay, back to recipe! I put ice cubes in a cup with the water before I start so the water gets very cold. Salt is important taste.


This makes a large amount for a double crust pie, but I like to be sure I have enough....hate coming up short. I just throw away any extra pieces. If you want just a single crust, just cut the recipe in half.

With a double crust, I always brush the top crust with a little milk and then sprinkle cinnamon and sugar on it.
Bake for about 40 minutes at 400 degrees, or bake until its golden brown!

Got this beauty today:

And this sink yesterday: 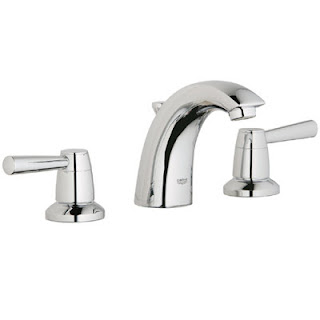 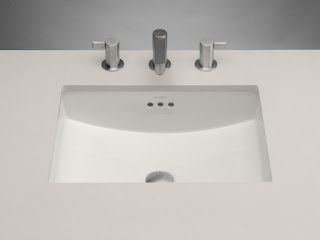 I haven't had a food allergy incident for an entire year and I was beginning to think it was because I've avoided Reisling, my self-diagnosed culprit. Well, that all changed last night. I made dinner which consisted of:
All of this food is completely normal for me to eat. The only ingredient listed that I don't consume on a regular basis is the fresh sage. But, I have had it before and didn't get a reaction. I haven't had a glass of any type of wine in about a week.
My reaction started as it usually does 30-60 minutes after I eat with a bad stomach ache. Piercing stomach pain and diarreah along with nausea. Followed by an itchy throat, runny nose, hives on my chest and stomach (only three this time!), and a barely-swollen bottom lip.
I took one Bendryl and symptoms went away almost immediately. Then, sleep.
What gives?!
Posted by Jaime at 6:00 AM No comments: