Tick tock, tick tock. We are already into the 8th day of March and I am desperately trying to keep my head above water! A LOT is going on with work as you might imagine and every day is filled with more phone calls, more emails, more paperwork, and more questions than the day before. It is an exciting time. It is a crazy time. It is a fantastic time!

It is the perfect time for this month's goals about work. I need to add a new item on my 42goals list for getting to work early because I haven't been tracking that yet. But, off the record I've been doing pretty good. Every minute before 8am is actually the BEST time to get work done. It's still hard to get up early when I have a lovey dove cuddled up next to me every morning. But, it's important to get to work early when these days I have meetings every half hour, stacks of files piling up on my desk, and the day seems to pass by in the blink of an eye. It's really an awesome thing.

I think I can pretty much cross 'aim higher' off on my list. The 1-minute rule is vital in that I take advantage of doing the little things NOW so that those piles of paper don't turn into a pile of unorganized chaos. I still plan on taking an Excel training class, but I don't think it will happen this month.

As for volunteering, I actually went to my first committee meeting tonight for Making Strides for Breast Cancer - the breast cancer walk that I participated in last year. I am officially a volunteer for this event, and I hope to do my best to make it the best event it can be.

Last Saturday, I spent nearly three hours in a conference room for another committee meeting for the local section of the American Chemical Society. I got our group into the 21st century and we tried Skyping with our fellow members who couldn't make the meeting in person. It all turned out great, and we are doing it again in May! Wahoo!

I also traveled to Sacramento last week for a three-day intro to HR course and let's just say I left with my head spinning. I won't bore you with details.

In the meantime, Steve has still been working on the bathroom remodel. Sunday, we installed the new window and it is GORGEOUS.

Here is a picture of the outside of the house when there was just a giant hole where the window should be. Together, we put in the window which was quite the ordeal, only from the standpoint that I am so freaking weak. But, Steve had everything planned out so well that it was really no big deal. I will take a picture when he re-installs the siding on the outside. 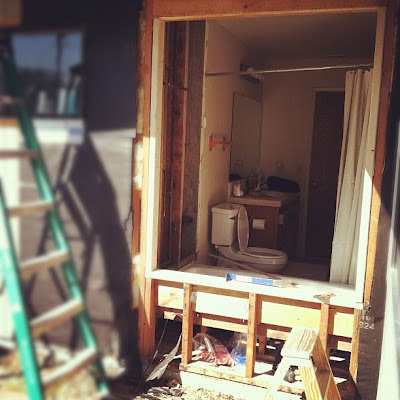 I also managed to re-pot 5 plants last weekend since they were all outgrowing their current pots. This meant I had to go to a home store to pick out the pots. I was there over an hour because they must have had thousands of pots to choose from! I came home with the biggest pot I've ever seen and two smaller ones, and two giant bags of potting soil.

Long story short, I potted a giant plant into the giant pot and filled it up with dirt and duh, it was too heavy for Steve and I to lift. We knew we'd need help to get it back inside so we decided to leave it be outside for the night and ask Steve's friend to come by the next evening. Well, of course it froze that night, and here, my friends, is what my poor plant looks like now. SOB! 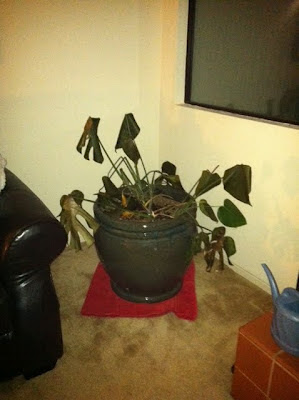