Before the Sufjan Stevens show in LA, Steve and I met up with Kara for dinner and drinks. We headed across the street from the Walt Disney Center to Blue Cow Kitchen. We settled into our seats, ordered a beer, and I got up to use the bathroom. I am walking down the hall towards the bathroom when my eyes are drawn to this bright green hat, and in an instant I recognize who this green hat belongs to. None other than SUFJAN STEVENS himself!! There he is, just sitting with his friends having dinner, too!

I will be honest and tell you that I am incredibly entertained by celebrity sightings, but this was much more than that.

My mind is blown that he is there. I am a firm believer in fate - that certain things in life are just meant to be. It is truly amazing to me that my very favorite musician is just a few feet away from me in this restaurant!  It is real life. It is our life!

And I think back to when I first heard Sufjan. Steve and I were on one of our first weekend getaways to Big Sur when I was flipping through his CD book trying to pick out music for the drive. I saw Sufjan Stevens and had no idea what or who it was, let alone how to pronounce it. But, I decided to take a chance at the unknown and that decision changed everything. The album and title song, "Come on Feel the Illinoise" really got me hooked. The music was incredible. It was creative and fun, lovely and joyful. Music you could really sing and shake to.  From that day forward, I couldn't get enough. I downloaded every album available and wanted more.

Fast forward 3 years and "The Tallest Man, The Broadest Shoulders" welcomes us into wedded bliss. Those horns and hand claps just scream celebration! And now every time we hear it, we think of our wedding day and how happy we are. Sufjan made the soundtrack to our love story.

And now I am stumbling into a bathroom, bewildered that he is here. I run back to Steve and Kara and all I can say is "you guys...guess who is here?!" I don't even remember if I let them guess before blurting out, "SUFJAN IS OVER THERE". They were just as stoked as I was but all we could do was continue our conversation while sneaking peeks at Sufjan and his buds.

A few minutes later, the fire alarm goes off. The kitchen is full of smoke and everyone is looking around but no one is budging. We look over to see Sufjan's reaction and he is just plugging his ears, waiting for it to stop like the rest of us. Well, it didn't stop and our server comes to apologize for both the alarm and our delayed dinner. The alarm still doesn't stop and Sufjan and his friends head out to the patio and I am so bummed that he is gone. Steve asks our server if she knows who she just forced to leave and she says she has no idea. We tell her that he is a musician who is performing across the street tonight, and that we played his music at our wedding. She is freaking out now and asks what band he is in (haha) and what kind of music he plays when all of a sudden, here comes Sufjan. I am not even kidding he is walking right over towards us. He keeps coming and I pray the waitress stays with us at the table so that he has to come even closer, but now that she knows he is "somebody", she steps away to talk to him. In the most sweet, shy voice ever, he says to her, "Excuse me, I ordered some potato chips and haven't gotten them yet". She explains and apologizes for the delay and they seem to be talking forever, all the while we are trying to listen and that's when we noticed the funniest part of the whole ordeal.  A few moments prior when he was enjoying his meal and conversation with his friends, we could only see him from the shoulders up. He looked like the most normal, well composed person, wearing an average tank top and green ball cap.....one would never know he was a famous musician.  But now we could see the whole package - unlaced combat boots, denim jacket, tight jeans - and the stature he assumed while talking to the waitress was quite striking! Picture a cross between a confident Steve Urkle and an awkward rock star.  It blatantly revealed a very eccentric man. He was the enigma I always dreamt him to be.

The waitress eventually came back with a free beer for Steve and his freshly re-made food - yes it was Steve's sammy that caused the fire alarm and all of this craziness!! She told us to go say hi to Sufjan and tell him about our wedding song, but we couldn't. We soaked in the memory of this night, laughed some more about that crazy stance and compared notes on how hot we all thought he was. Steve, included.

And then, for the second time that night, a gigantic cockroach ran across the dining room floor and we got the hell out of there. 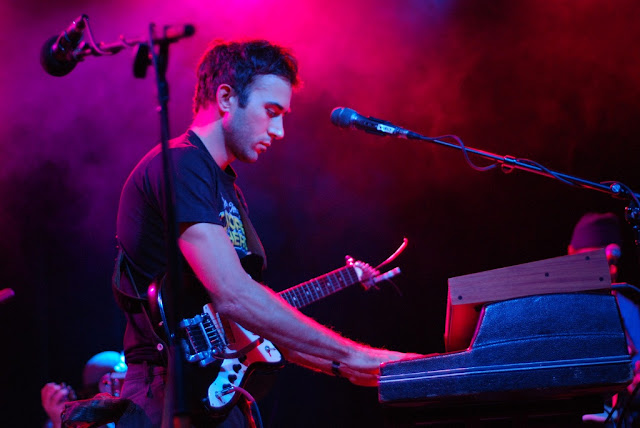