Yes, I am dedicating this entire post to TOILETS because the Japanese are obsessed with them. When we were out and about and wanted to know where the bathroom was, all we'd have to say is "TOILET" and they got it. In fact, most of the restrooms were labeled "TOILET". The word "bathroom" was completely foreign to them, but at least there was no confusion as to what we needed. Yes, ma'am, I am going to go deposit something in your toilet. Thank you very much. 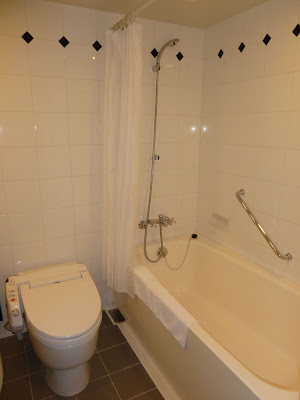 Our hotel room was our first experience with toilets. Ours had an assortment of features with a ton of buttons to control these features. The only one I tried was the heated seat. Mmm I loooved sitting down on a nice warm seat every time! Apparently if we wanted to, we could have washed our bums with a splash of water, and then dried it off with a blast of air. I kind of wish I would have tried this, but for some reason I felt weird about it. All toilets had two flushing options - I'm assuming one for liquid and one for solid. But, the labels were always in Japanese and I could never decipher the poo and pee symbols! 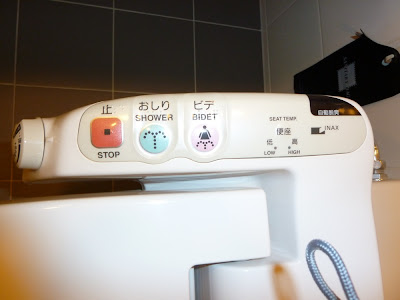 Our hotel toilet was relatively less intimidating than some toilets in fancy restaurants and stores, which had WAY more buttons and controls, none of which were in English like ours was. The one thing that every bathroom in Japan had in common was that they all had a panic button in each stall. Usually it was red or it was marked with some sort of emergency symbol or a police man icon. I found it very interesting that EVERY bathroom stall had this and could only imagine the implications of someone pressing this button. During our time in Japan we actually had an incident with a panic button...
We were out to dinner with our colleague and Steve excused himself to the toilet. A few minutes later, our colleague's wife and I went to the ladies toilet. These were the fanciest toilets of all, so I was rather enjoying my seat and looking at all the technology in there. Hey! I can warm up the water that splashes my area! COOL! But, weird! And ew! As I was finishing up, I heard a loud beeping sound, like an alarm you might hear at a retail store at the front door. I went out to wash my hands and all of a sudden a police man came charging in the bathroom and right up to me! He was yelling something in Japanese right at me, in my face, probably a foot away! I had NO idea what was going on. Our friend's wife talked to the police officer and they went back and forth a few times, then we left. I couldn't ask her what happened because she doesn't speak any english! I was sooo confused and a little frightened! I went back into the restaurant and told Steve that a weird alarm went off and a police man yelled at me! He said, "I know something about that - I'll tell you later".
Come to find out, Steve also thought these bathrooms were pretty awesome except for the fact that the toilet had TOO many buttons! He couldn't figure out how to flush, so he started randomly pressing things. Apparently he pressed the panic button and caused the alarm to go off!! He said he was freaked out, so he ran out of the bathroom and got a little disoriented and somehow made his way into the ladies room!!! He freaked out again and ran out and finally found his way back to the restaurant. So that's why the police officer came in the ladies room - someone probably saw "some American guy" running into the ladies room. I have no idea what was said between the officer and our friend's wife, but I bet she knew it was probably Steve since we were the ONLY Americans anywhere around the area. haha!
Another note about the bathrooms (who knew there'd be so much to say?!)...all of the women's stalls had the CUTEST, tiniest little trash bins. They could probably fit like ONE pad, or a couple tampon wrappers, but that's it. But seriously, they were the teeniest little trash can I've ever seen and (I never thought I'd say this about a feminine napkin disposal container), but they were so cute I just wanted to eat them up!
There were also no toilet seat covers. Instead, they had sanitizer dispensers and napkins to wipe the seat clean after each use. Did people actually do that? I had no idea. I just put down a couple strips of TP on the toilet every time...that way I felt sanitary AND I could feel that warm seat!
Another type of toilet that was not so cute, was the public toilet. The parks, gardens, and subway stations all had these traditional Japanese toilets (if you want to call it that.) 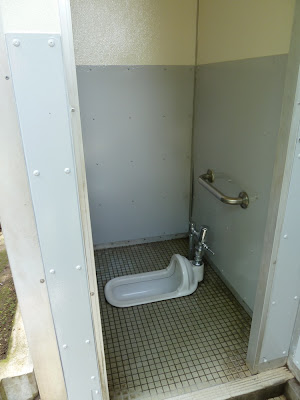 This is the first one we came across, and it just so happened that I had to pee very badly and had no choice but to use it! I wasn't sure which way to squat - facing the flusher? With my back against it? Or, since there is a handrail there, am I supposed to be sideways over the length of the hole? Where do I put my feet?! But I figured it out the best I could and managed not to spray myself. Sometimes they had a bathroom with the option of "western toilets" or these. I found it kind of funny that many of the Japanese women chose these floor toilets over the western ones.
These types of bathrooms usually had sinks, but never any soap or paper towels. The hand sanitizer, dissolving paper soap and tissues came in VERY handy on this trip :) Some of the nicer bathrooms had soap, but rarely ever did they have paper towels or even air driers. We'd see tons of beautiful handkerchiefs in every store we went into and after awhile we figured out that EVERYONE in Japan carries these with them to dry their hands off in the bathrooms!
Posted by Jaime at 5:26 PM