One of the things that I loved most about Japan was the FASHION! Everyone looked so good. I've never really thought asian people were attractive, but the women were absolutely gorgeous and the men were stunning. We were staying in a business district and saw lots of men in suits. Their suits were always pressed, perfectly tailored, and they all had the coolest shoes. The women wore pencil skirts with bouncy blouses and awesome high heels that made me swoon. They dressed in layers with sweet lacey camisoles and sheer black tights. The women had beautiful silky black hair and creamy skin and the men had chisseled jaws, light eyes, and wavy hair. Weird, huh?!  Every day was a fashion show in the middle of Roppongi and I was bright-eyed and inspired. Unfortunately I didn't get very many photos of the cute outfits, but here is a photo of a major crossing where you can see lots of suits and if you click on the photo and zoom in, you can see some purple heels!!! 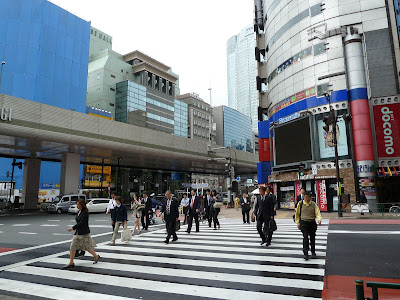 We found a small boutique on one of the main streets that I fell in love with. It wasn't anything special, but the workers were nice and they had lots of interesting things to look at and touch. After the first day of watching all of the beautiful people around Roppongi, I noticed the women also wore these little half-sock things. I've never seen them in the U.S. (but that's not saying much - I live in SLOOOOWtown), but they were the cutest things ever and I just had to have some!! The boutique carried a huge variety of these little socks and they were 3 for 1020 yen (about 10 bucks), so I stocked up! You're probably wondering what the hell I'm talking about, so here's a picture of some. 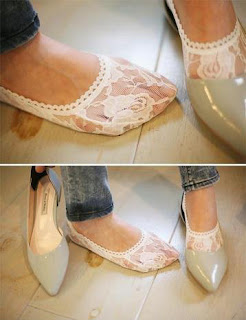 They go perfectly under flats or even heels. A little bit of the design sticks out and gives a plain shoe some flair! I love these and I bought like 10 pair in all different colors and designs.

We went to a neighborhood in Tokyo called Ginza which is one of the major shopping districts. It was one of our favorite spots because they closed down the main street to traffic on Sundays and we could walk in the middle. The buildings in Ginza were colorful and interesting but the point of this post is the fashion, so here's a snapshot of one of the largest stores we saw in all of Tokyo...Forever 21! It must be popular in Japan because this was the second one we saw, and they were both multi-level. All of the twenty-something women were carrying Forever 21 bags and although we didn't go inside the store, it looked even more nuts than the one in San Francisco. 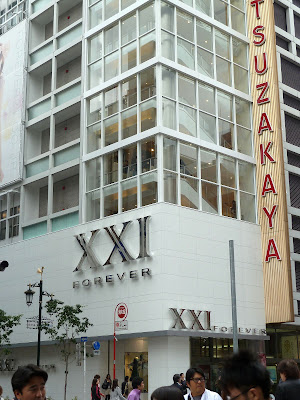 The other major stores in Ginza were all very fancy - Louies Vuitton, Coach, Burberry, Tiffany, Swarovski crystals, Prada, etc..but the ONLY store with an actual LINE outside was Abercrombie and Fitch. They even had young Japanese guys standing outside dressed in A&F garb, greeting the customers. It was an interesting site to say the least.
Posted by Jaime at 4:55 PM