Believe it or not, there is actually something worse than stanky coffee breath. As most of you probably already know, I did not get into NYU. =( Their letter even said, "We cannot believe you applied here, what were you thinking? Idiot." Just kidding, they didn't say that, but I am really disapointed that I didn't get in. Luckily, I was on my way to San Diego when I found out so I had a nice weekend to get my mind elsewhere. Poo on NYU. Rejection sucks. But hey, my mom and my aunt are going to take me on vacation to New York this summer. WOOT! I'm still waiting to hear back from Boston University and Kent State. I doubt I'll get into Boston, but Kent is possible...but I'm not even sure if I want to go there. Ugg I wish I was a trust fund baby and I could just go shoe shopping all day.

On a lighter note, I had a blast in San Diego with Tim this weekend. We left SLO at 11 on Friday morning and didn't get to San Diego until 830!!! Damn rain and lame lame lame LA. We stayed at the Grand Hyatt by the harbor downtown, and it was prob 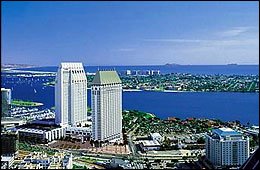 ably the nicest hotel I've been to. When we arrived, there was a bottle of wine on ice and cheese, crackers and fruit...we couldn't figure out why we were so special, but I finally realized it was probably my mom! So I called her and sure enough, she had made arrangements with the hotel to surprise us with treats!!! What a sweet mom!
We dressed in green and went to Mooses to meet up with some of Tim's friends. We drank for a bit, and chair danced until it was time to walk back to the hotel. We went to the very top of the Hyatt to the bar that looks over the bay and the city. It was beautiful!!!

Saturday, we slept in and checked out of the hotel. I didn't want to leave!! Tim showed me places he used to live and hi 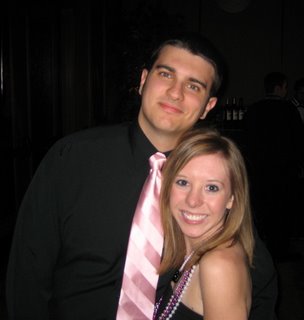 s old highschool and all his favorite places to eat. We hung out with his dad for a bit and got ready for Tim's friend's 21st birthday party. It was a black and pink party at the Barona Casino. This party was incredible! It was decorated like a wedding with pink and black balloons, pink roses, pretty table settings with name placards and a wine glass filled with goodies for everyone to take home. There was a dj, and an open bar, and a three course dinner and coffee. Tim and I swing danced, and attempted salsa but my feet kept getting tangled in the balloon strings, my bra was falling, and I was a bit tipsy so we probably looked silly, but it was a blast. After the party, Tim, Dan, Ali, and I went to the casino and the guys gambled while us girls gave them good luck with our magic pink rings. It worked because they both won!! Later that night we went to Tim's mom's house and hung out for a bit before bed. Tim's family is so sweet!! I had a really nice time meeting them, and seeing where Tim grew up!
To do: