Saturday marked the inaugural Making Strides Against Breast Cancer 5k walk in downtown San Luis Obispo. Overall, nearly $30,000 was raised for breast cancer. Can you believe it?! My team, The Boob Patrol, raised $1800 and $710 of that was from my own fundraising efforts!! I want to thank all of you who donated and supported me in my first charity walk! You ALL light up my life!

Now, for some highlights of the event!

I got there early to help set up and the volunteer booth had lots of yummy breakfast pastries for the volunteers. Well, a homeless man decided to take this opportunity and help himself! He came to the booth THREE times for snacks, balancing a handful of banana bread, bagels, and cinnamon rolls in one hand, and a sleeping bag in the other. One time he came with a plastic bag and nonchalantly loaded it up, taking his sweet time. Normally, I would be appalled at such a bold move, but it was actually entertaining. He wasn't trying to be sneaky about it..just going about his business as usual. He even managed to get a participant sticker and wore it proudly on his sweatshirt.

San Luis Obispo is normally pretty chilly in the mornings, but this day, it was at least 70 degrees by 8am. By the time the walk started, everyone had peeled off their layers and smeared on the sunscreen. Our team wore hot pink boas, which were super fun, but made us incredibly hot and sweaty!! 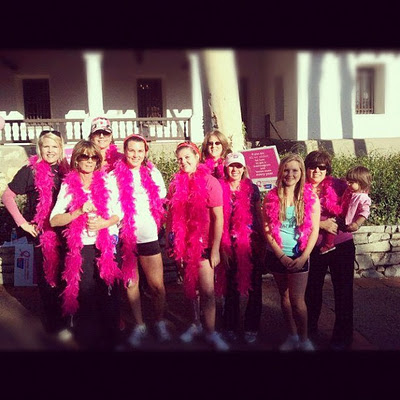 The morning started out with a welcome message from the event coordinator who is a breast cancer survivor. Then, they invited all of the women up on the stage who survived breast cancer or were in the middle of treatment. It was inspiring, sad, overwhelming, and joyful all at the same time. A couple of the women had survived two rounds of cancer. A  younger woman followed her mom on stage as they battled this horrible disease together. Even though I don't personally know anyone who has struggled with breast cancer, these women really made me feel proud that I was there to help THEM. I walked for breast cancer patients around the globe. I walked for family and friends who have suffered or are suffering from ALL kinds of cancer. 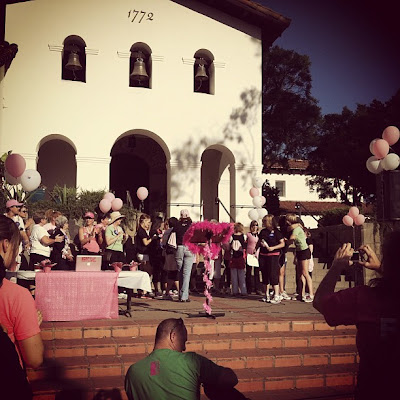 Before the walk began, we did a warm-up routine to Lady Gaga's, The Edge. Four ladies were up on stage leading the "dance" and they were smiling so big! It made me laugh out loud and pause for a moment to take it all in. Hundreds of people, dressed in crazy pink outfits, all shaking their butts. I looked around at all the teenage girls there, and thought, "I hope they are looking at these strong women with admiration!" I know I was. 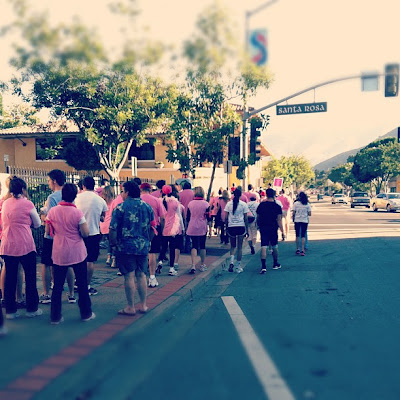 Along the way, a chatty young girl, probably about 13 or 14 came walking up beside me and said, "you look athletic!" HA! I think that is the first time in my life I heard those words. She also kept yipping and whooping as we passed onlookers and after each woot she'd say, "just had to throw that out there". Yeah, she pretty much made my day. 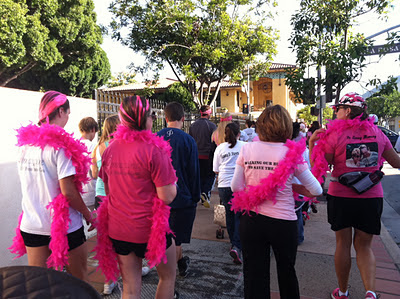 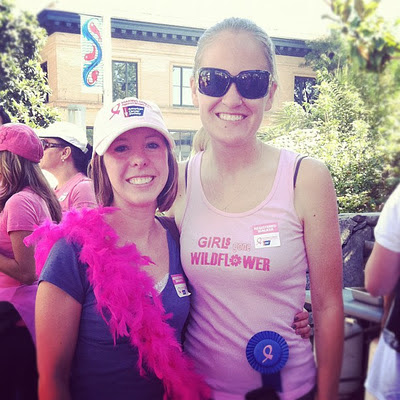