And no, I'm not talking about a football team.

Today I went in for food allergy testing to determine what I couldn't figure out on my own. The doctor also recommended I get tested for pollens from trees, grasses and weeds since sometimes food allergies can occur from cross-pollination. Overall, I was tested for 82 different species. 82 pricks on the skin of my back. Fun!

I don't know everything they tested for, but there was a good combination from my list of foods that I ate before having a reaction, common allergen foods, and other items that were close to the foods I listed. This includes rice, lettuce, tomatoes, onions, garlic, corn, wheat, soy, eggs, milk, grapes, sesame seeds, navy beans, shrimp, fish, and chicken. I have no idea what trees, weed, and grasses they tested for other than the ones that came up with very strong positive results.

Before I get to the results, let me explain the process a little bit for those of you who have never been tested for allergies. I arrived at 3:30 and first the nurse numbered my back in columns. 82 times. No big deal. Each test felt like a little scratch, some of which stung a bit right away, and others I could hardly feel at all. I kept imagining the nurse scratching over a mole and that made me feel worse than the actual scratch.

After all 82 pricks, she asked if it felt itchy. It felt more tingly and burning than itchy, which meant sitting there for the 20 minute incubation period was not that bad. 12 minutes in, the nurse mentioned she was surprised I wasn't itching because she's seen a lot of people with less worse reactions and were going nuts not being able to scratch their itch! Part of that statement made me nervous, but since it wasn't itchy, I wasn't too worried.

Five minutes later, she decided to go ahead with the measuring since I was "reacting so much". (They measure the size of the hives that appear which determines the severity of the allergy). About halfway through the measuring (this was the longest part), I began to feel strange. Like no other feeling I've had before. My heart was beating strangely. Not super fast, but faster than normal, and extremely strong. I felt a tightness in my chest, but nothing too uncomfortable. I kept talking to myself, "should I tell her how I am feeling? Or, should I wait until she is done? Yeah, wait until she is done. I am sure she is almost done. Hurry up! Eek, this is weird. What if I pass out right here? What if my heart stops?!" Scary stuff!! She finally finished and I told her I was feeling strange. She asked me for details and gave me some water and cleaned off the testing sites with water, alcohol and cream. I started to feel OK, but not great.

The nurse wanted to do a second test for the spots that were unclear, which meant pricks THROUGH the skin on my arms. I wasn't looking forward to that and as I sat there waiting for her to gather supplies, I felt worse. A second nurse came in, asked me about my symptoms, immediately told the other nurse to take my blood pressure and pulse. They called off the secondary test and she gave me some liquid antihistamine immediately. The strange heart sensation and tightness subsided almost immediately, but I began to wheeze, sneeze, sniff, and my throat itched so bad, I could barely speak.

Are you surprised!? Yeah, me, neither. 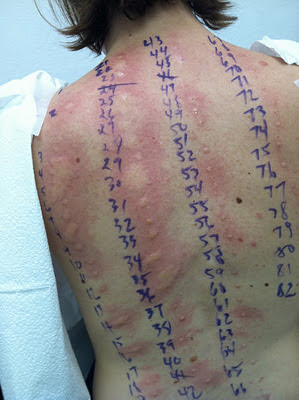 They had me sit in the waiting room until the doctor was ready to review the results. Since my symptoms didn't improve, and actually got worse, the nurse told the doctor what was going on. He suggested I take a regular allergy pill, Singulair, an oral steriod, Prednisone, and a SHOT of epinephrine! YES, a shot right in my thigh! You know, just that stuff people carry around with them when they are having a SEVERE ALLERGIC REACTION!! Literally 3 minutes later, I was already feeling almost back to normal.

So by now its 5:15 and I still haven't learned what is causing my allergies. I wait and wait some more..which at this point is completely fine with me because I am still recovering from all of that and I am oh so anxious to get answers!

After a mix up with the doctor's schedule (I wasn't on it), I am finally talking to him about the results. There was only ONE positive result for the food allergy tests and....drumroll please....NAVY BEANS! What the hell are navy beans?! And when have I eaten them?! He quickly moved onto the pollens, which sort of ercked me because I was more interested in the foods, obviously. Well, turns out I am "exquisitely sensitive" (yes, his words!) to three trees: Ash, Alder, and Birch. He said those were the biggest reactions by far. Hmm, funny thing, we have a birch tree right outside our bedroom window. Anyway, he asked if I ever thought I had reactions to apples because apparently there is some sort of cross-pollination with birch trees and apples. I told him that sometimes when I eat an apple, my mouth does feel a bit tingly. Ding ding ding! But, this doesn't resolve my other food allergy problem...

So I asked him again, "so no other FOODS?" and he mentioned that there was a slight reaction to soy, corn, and wheat. Alright, more clues! There was corn in some of the dishes I ate, and lots of wheat, so that's something! He said the second step would be to order a RAST (radioallergosorbent test), or a blood test to re-examine the hits for further information. Sign me up!

The rest of the consult was about allergy shots, home air filters, car air filters, closing the doors and windows in the spring and fall, and driving with the windows up. Hmm, most of that list sounds horrid. I was a bit annoyed that he seemed to be pushing the allergy shots, which I am absolutely NOT interested in. And after all, the only reason I even agreed to testing for pollens was for the cross-pollination with foods.

With that said, I have to get more blood drawn to do the RAST test and then hopefully he will be able to come to more conclusions than NAVY BEANS! Uggg.

Alright, folks, I think this journey is just beginning!
Posted by Jaime at 9:30 PM