On a trip to the grocery store to pick up some tri-tip for this weekend's BBQ, Steve found some Veal Scallopini on "Manager's Special". I looked at him like he was insane. First of all, I've never had veal and I wasn't really interested in trying it now. Secondly, "manager's special" gives me the heeby jeebies when it comes to meat. The sticker should say "this meat will be dog food soon".

Anyway we argued over the veal for a few minutes. He said I never try anything new. I told him it was no different than him not eating corn on the cob or green beans. He argued that it was completely different because he was forced to eat corn on the cob and green beans as a child and never liked them, and he continues not to like them. I on the other hand, have never even tried veal, yet have this instinctual aversion to it. Baby cow? NT, Steve! "But look how tender it looks", he says. That's my point. EW. 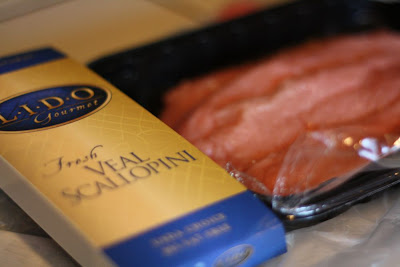 Well, Steve won the battle and we took that baby cow home. I googled veal scallopini and came across a recipe that didn't look too bad. Breaded veal, browned on the stove in hot oil and garlic, then simmered with green bell peppers and mushrooms. How bad can it be?! 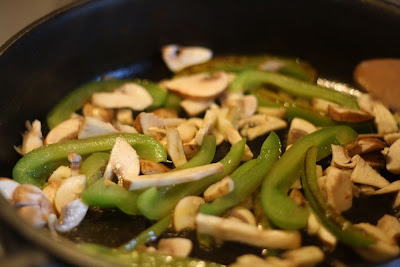 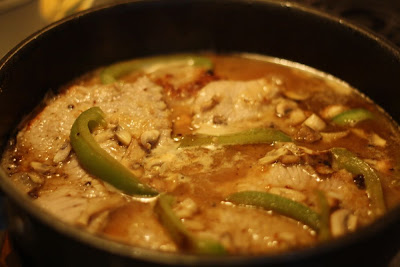 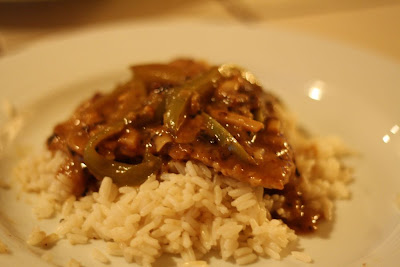 The verdict? STRANGE! Not necessarily BAD, but weird. And honestly, I couldn't tell if it was the meat that tasted weird, or the sauce or the mushrooms. I just started eating mushrooms recently and usually only eat baby bellas. Trader Joe's only had "white mushrooms" whatever that means, so I used those. The sauce was made from sauted minced garlic in olive oil and white wine. Steve thinks the "weird" taste came from burnt garlic. Could be.

Anyway, would I try it again? Yes...without the garlic and with baby bellas, and without the Manager's Special sticker!!!
Posted by Jaime at 10:50 AM