For the past couple of years I've noticed a small lump to the right of my trachea that bothered me mostly when I became sick. I figured it was a swollen lymph node, but it never completely went away and it was only on the right side. I went to an Ear, Nose, and Throat specialist to find out what it was and the doctor took an Ultrasound of my neck. You can see the dark mass there on my actual Ultrasound printout which is believed to be a thyroglossal duct cyst. Apparently I've had this cyst forever, but it grows slowly overtime. It was formed when I was in the womb. The thyroid gland begins to develop under the tongue, and as a baby grows, the thyroid moves down into the neck where it is supposed to be. However, sometimes tiny pieces of the thyroid get stuck on the Hyoid bone (the tiny bone in the jaw) in the process. This is what happened with me and over the past 26 years, it has grown into a marble sized bump. The Doctor said that it is rare that this would turn into cancer overtime, but there is a possibility. If I didn't get the cyst removed, it would just continue to grow and eventually I would have a huge mass jutting out of my neck. Sexy? I think not. So, long story short I am having it removed Friday morning. It's a 1.5 hour surgery and I'll be completely under anesthesia, which for me is the scariest part! The Dr said I will have a sore throat and stitches for a week and a small scar that BETTER FADE BEFORE MY WEDDING. 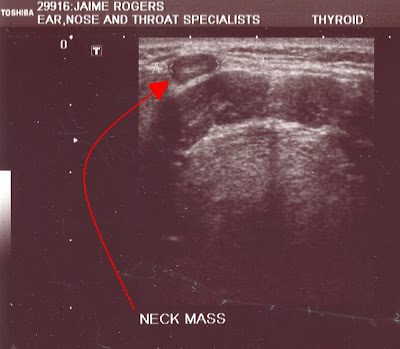