Our colleague from Japan invited us to a Japanese show after our Tempura meal. He said it was a "fashion and dance" show where "New Halfs" perform. We didn't quite understand what he meant by New Half, so he explained, "you know - part man, part woman. We call them New Half in Japan" Ooooh! So, we were on our way to see a Japanese drag show! Sweet! Our colleague and his wife found the whole thing hysterical and couldn't wait to share the fun with us.
We sat down at a table where a waiter greeted us and talked to our friend in Japanese for awhile and afterwards said that he asked the waiter to send out a New Half to talk with us before the show! A few minutes later, a gorgeous Japanese woman came over and sat down with us. As soon as she started speaking we knew SHE was really a HE. But, oh my gosh you would have never guessed if it weren't for the manly, deep voice! We told her we were from California and although she recognized "California", she asked our colleague if that was part of the United States! ha! She called herself a "She-Male" and talked about wanting to go to Las Vegas to perform there with other She-Males! The show began and all of the "women" performers were actually men. There were also some real men who portrayed characters such as samurai and pimps. Mostly, the performers danced and acted out scenes through music, costumes, and props. All of the costumes were elaborate and beautiful and our New Half friend even showed off her womanly boobs by prancing around in a sequined tube top! My favorite part of the performance was their dance to Nsync's "Pop". They grooved to that song like it was the best music the've ever heard.
The show was based on "Yukaku" culture (licensed prostitution quarters) during the Edo Era (1603-1868). The fashion trends during this time were set by prostitutes rather than the towsnpeople. The women of the quarters were often major themes in drama and art, and artists presented brothels like theatres, depicting hero and heroine in carnal engagement. Popular music, language, fashion, cosmetics, hairstyles, and dance were all part of this Yukaku culture. The Yukaku neighborhoods matured into a highly structured urban system and became rich with tradition.
After the show, the performers gathered together on stage and all of a sudden the MC was calling, "Dwight! Honeymoon!" and we were ushered to the stage! Apparently our colleague told the waiter we were on our honeymoon so they made a special announcement and let us take a picture with the group! When we got up there, all of the performers kept saying, "Congrat-lation!! Congrat-lation!!" and bowing like crazy. Best night in Japan. 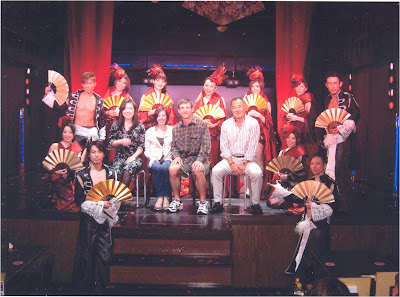